I have downed sufficiently many bottles of the beer we made in earlier this summer with Erkki and Arttu in order to feel comfortable to give a review of the beer.

The beer is hazy and has an orange tint. The head has a nice color but it dissipates rather quickly, which is a real shame. If the head was firmer it would hold the aroma in the glass for a longer time. Tropical fruits are heavily present in the aroma, with mango and pineapple at the forefront. The beer is surprisingly light in body given the fact that we added a healthy amount of wheat to the mash. The lightness of the body, together with a relatively light carbonation (2 g CO2 / 1 l) makes the beer very easy to drink. Tropical fruits dominate the taste; pineapple, watermelon and a hint of white pepper can be detected. There is almost no bitterness, and I suspect that the bitterness that can be found comes from the hop residue that we didn’t manage to remove at bottling (you can see small bits of hops at the bottom of the glass above). The lack of bitterness makes the beer more like a hop juice like it is supposed to be. 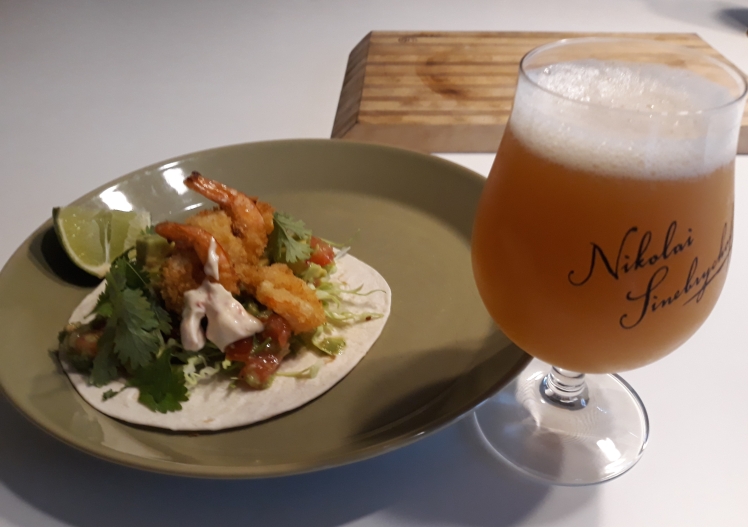 Due to the lack of bitterness this beer pairs excellently with spicy food, like crispy beer battered shrimps with habanero guacamole and chili mayo on a wheat tortilla. All in all I really like this beer, though I have to admit that I do favor real IPAs to NEIPAs since I love the mouth numbing feeling that you get from drinking an IPA with an incredibly high IBU rate. NEIPA’s are a great choice for those people who don’t like too bitter beer but would still want to drink something that is packed with hop flavor and aroma. Therefore I suspect that NEIPAs will be popular for a much longer time than black IPAs were, since black IPAs were, well, just IPAs that were black in color. The NEIPA-style on the other hand provides something new, a beer with loads of hops without (almost) any bitterness.

If I were to brew this beer again I would add some carapils-malt to the grist which would make the head a bit sturdier. Adding more mango would also be a good option, since it could have had a more dominant role.